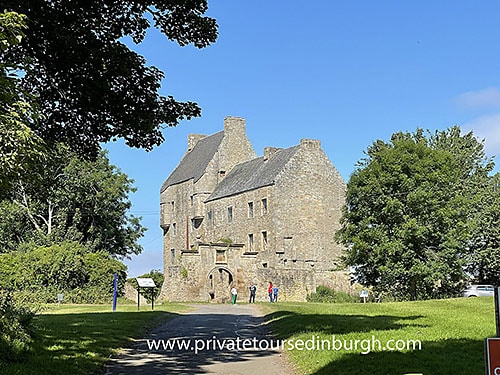 Season 6 of Outlander might have only launched last month , but filming for season 7 is already underway .  Sam Heughan got in to character as he clambered aboard a ship on Thursday. The actor could be seen with his iconic red wig in the The Port of Burntisland in Fife, Scotland.

The historical drama, which is based on the novel series of the same name by Diana Gabaldon, features Sam as one of the main characters alongside Caitriona Balfe.

Outlander, which debuted in 2014, follows the tale of a World War II nurse Claire Randall (Caitriona) who is transported back in time to 1743 when she touches the standing stones at Craigh na dun while on honeymoon with her husband Frank Randall .

There she meets and falls in love with Jamie Fraser (Sam), and they have a child together Brianna (Sophie Skelton).

Last year the cast of the show revealed it had been picked up for a seventh season that will span 16 episodes.

The network Starz confirmed that it will follow the seventh of eight books in the Outlander novel series, entitled An Echo in the Bone.

Season six of the series was slated to have 12 episodes, but it had to be shortened to eight due to the COVID-19 pandemic and actress Caitriona’s growing baby bump, which was becoming harder to hide in scenes.

But fans won’t be shortchanged in the end, as the brass decided to add those four episodes to make for a 16-episode season seven