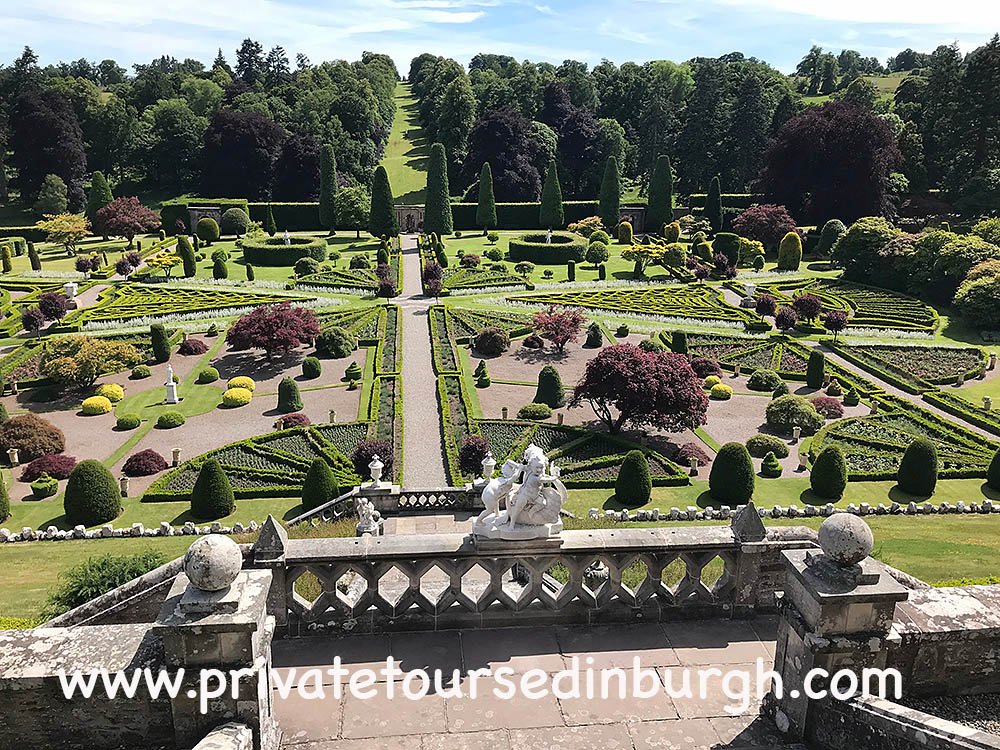 The first location on this Outlander tour is Lallybroch – Midhope Castle, ancestral home of Jamie Fraser . Outlander scenes were shot at Midhope Castle on the fringes of the Hopetoun Estate near South Queensferry.

Midhope was built in the 15th Century and was built by John Martyne, laird of Medhope. It was rebuilt in the mid 1600s and remains much the same today.

Visitors can enjoy Midhope from the outside as the interior is inaccessible . No-one has lived in the castle for over 100 years . In Outlander Jamie calls Claire Sassenach as a term of affection .

Midhope Castle, a 15th century tower house, is used as Lallybroch (also known as Broch Tuarach) . Left to Jamie by his parents, Brian and Ellen, Lallybroch is also home to Jamie’s sister, Jenny, her husband Ian Murray and their children. With Lallybroch being an important part of the Outlander story, much use is made of Midhope Castle in seasons one and two .

Lallybroch Castle tours can be booked on

Drummond Castle Gardens, which are protected as a category A listed building — in contrast to the B listed castle – attract thousands of visitors per year, and are included on the Inventory of Gardens and Designed Landscapes in Scotland.The gardens — complete with peacocks — feature ancient yew hedges and the remaining beech tree planted by Queen Victoria in 1842 . But the grounds — which also featured in 1995 feature film Rob Roy, starring Liam Neeson — have now seen a huge boost in tourist numbers thanks to the so-called “Outlander effect”.

Geillis Duncan’s house and the town square where Geillis is sentenced to burn for being a witch. Jamie and Claire rescue the thief, Tammas, when his ear is pinned to the post.

Laoghaire’s home can be seen, near Mercat Cross, on Little Causeway.

White-harled houses with red-tiled roofs line the steep cobbled streets which run from the market cross to the hilltop abbey. In the centre is the ochre-coloured palace with its beautifully reconstructed period garden, complete with herbs, fruit and vegetables, and rare Scots Dumpy hens.