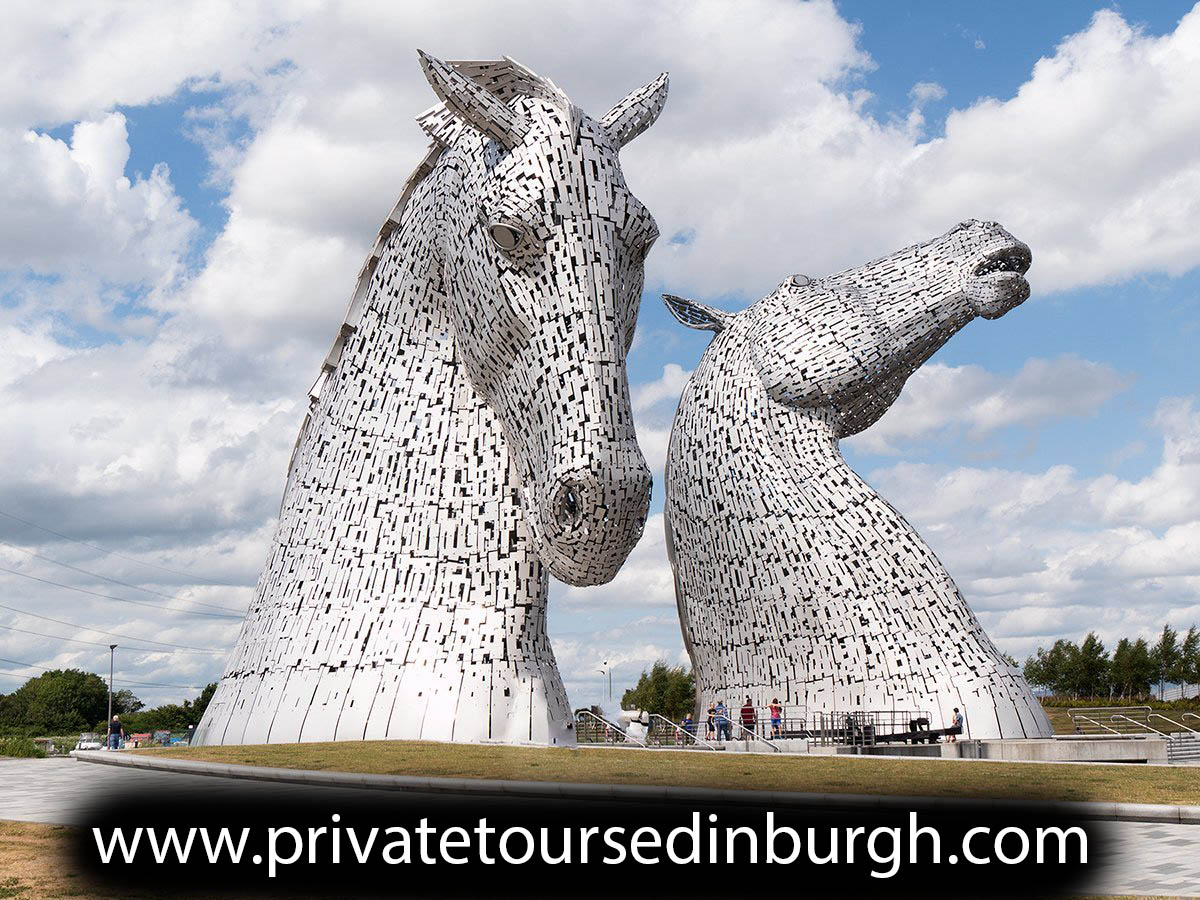 Looking for things to do in Edinburgh ? How about taking a tour from Edinburgh of two ancient castles and the Kelpies  ?

Our  Kelpies and castles tour features a visit to the amazing Kelpies  in Falkirk and two ancient Scottish castles in Stirling and Doune .

The Kelpies and castles tours are available daily seven days a week   .The tour spends up to an hour at each location .

Normal pickup point is Edinburgh city centre . Five hour private tour around Falkirk for up to four passengers. Tours start at 10 am weekdays . Explore the famous Kelpies  in Falkirk .

The Kelpies sculptures are the largest equine sculptures in the world and they have become Scotland’s best known cultural landmark with over one million visitors .

The Kelpies are 30 metre high sculptures of Clydesdale horses , a unique tribute to the work horses of Scottish industry and economy, pulling the freight barges and coalships along the canals of Scotland in the nineteenth century . Canals shaped the geographical layout of the Falkirk area. The Kelpies are the centrepiece of the Helix Park in Falkirk .

The Kelpies have become the most famous equine sculptures in the world . But now they have been given another name to make them more attractive to Chinese tourists.

VisitBritain, which markets the UK abroad, has dubbed them ‘Kai Po Ju Ma’ in promotional literature in China – which translates as “glorious armoured giant horses”.

Stirling Castle is one of Scotland’s most impressive castles due to its imposing position and impressive architecture. The castle was the home of Mary, Queen of Scots and the Stewart kings of Scotland .

Stirling Castle is not only one of Scotland’s grandest and most imposing castles, it was also a real favourite with Scotland’s kings and queens. And their investment in it demonstrated just how much they loved to use it, as well as their desire to ensure it both impressed all who visited it, and represented a statement of their power and wealth. James IV created the Great Hall, the largest medieval banqueting hall ever built in Scotland, and James V’s Royal Palace, with its lavishly decorated Renaissance façades, was a masterpiece of the period.

Major conservation work has been carried out at Stirling Castle over many years to preserve the attraction as a major national and international monument. The refurbishment of the Great Hall was completed ten years ago . A particular feature of the Great Hall is stained glass windows featuring clan crests . A number of banquets and concerts are held in the Hall throughout the year .

Doune Castle – featured in Game of Thrones and Monty Python

Your guide will give details of the history of the castle , information about the Game of Thrones filming plus all the other films made at Doune Castle including Monty Python and the Holy Grail .

The hall is accessed from the courtyard via a stair up to a triangular lobby, which in turn links the hall and kitchens by means of two large serving hatches with elliptical arches, unusual for this period.

The kitchen tower, virtually a tower house in its own right, is 17 metres (56 ft) by 8 metres (26 ft). The vaulted kitchen is on the hall level, above a cellar. One of the best-appointed castle kitchens in Scotland of its date, it has an oven and a 5.5-metre (18 ft) wide fireplace. A stair turret, added in 1581 and possibly replacing a timber stair, leads up from the lobby to two storeys of guest rooms. These include the “Royal Apartments”, a suite of two bedrooms plus an audience chamber, suitable for royal visitors.

The Kelpies and Castles tour costs £195 .