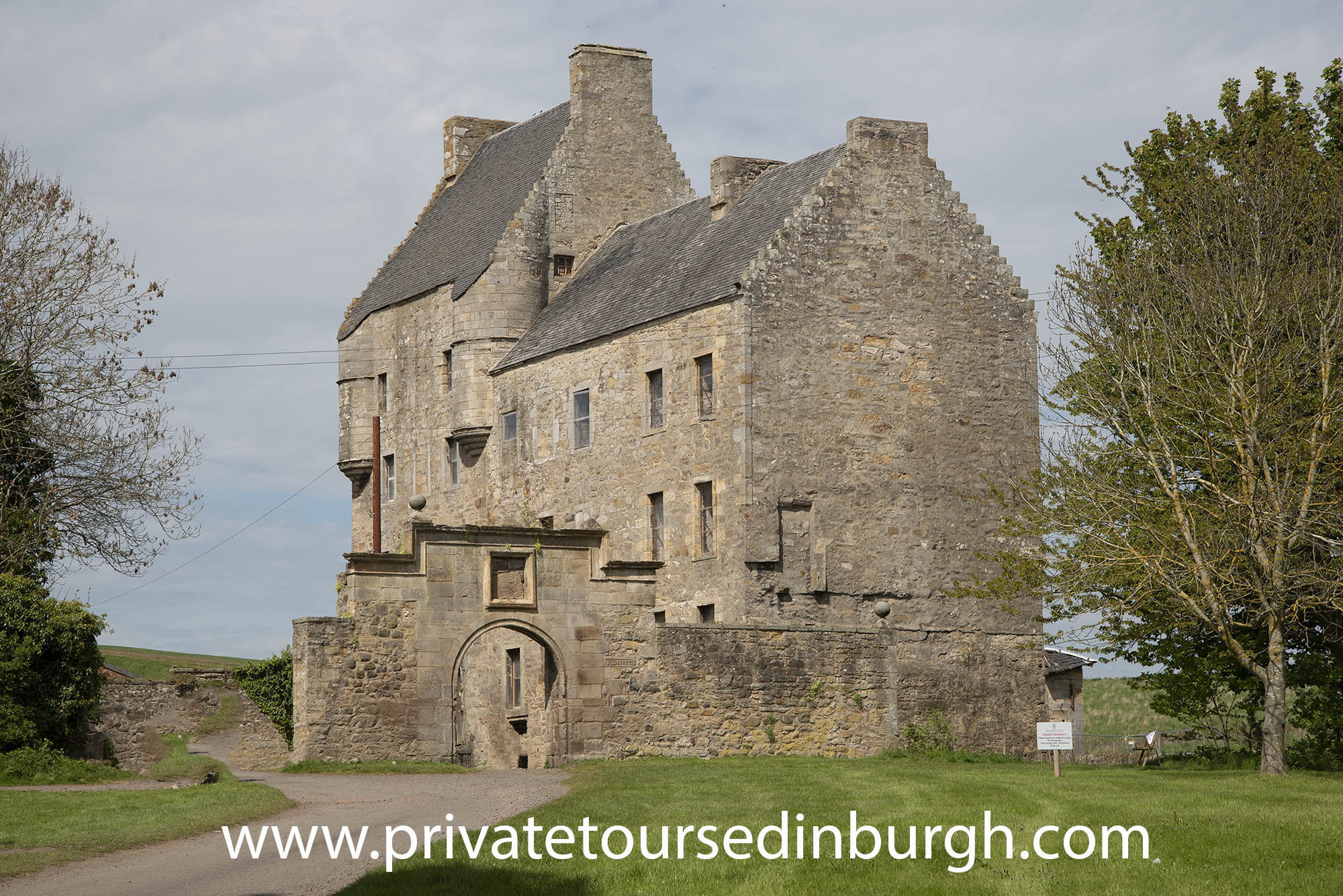 Our new Outlander and Game of Thrones tour is perfect for fans of the two most popular  TV shows on screen this year  .   First of all we take a unique tour of three key locations in the life of Outlander’s Jamie Fraser –  Lallybroch  ( Midhope Castle ) , Jamie’s ancestral home , Linlithgow Palace ( Wentworth Prison ) and  Blackness Castle ( Fort William ) . Then we visit Doune Castle , heavily featured in Game of Thrones , and also Castle Leoch In Outlander .

Tours start at 10 am . Our private group tours take up to four people to three Jamie Fraser Outlander filming locations. We also offer bespoke private tours with the option of choosing your own itinerary . This tour costs £190.

Tours start from your hotel or accommodation in Edinburgh or Glasgow .

The first location on this tour is Lallybroch – Midhope Castle, ancestral home of Jamie Fraser . Outlander scenes were shot at Midhope Castle on the fringes of the Hopetoun Estate near South Queensferry.

Midhope was built in the 15th Century by John Martyne, laird of Medhope. It was rebuilt in the mid 1600s and remains much the same today.

The interior of Midhope is inaccessible . No-one has lived in the castle for over 100 years .

Midhope Castle, a 16th-century tower house, is used as Lallybroch (also known as Broch Tuarach) in Outlander . Left to Jamie by his parents, Brian and Ellen, Lallybroch is also home to Jamie’s sister, Jenny, her husband Ian Murray and their children. Lallybroch is a crucial part of Jamie Fraser’s life in Outlander .

The castle is long and narrow because of the shape of the rock on which it is situated and it is sometimes called ‘ the ship that never sailed ‘ . It guards the bay at Blackness and is only a few miles from Linlithgow Palace. The first castle was built in the middle of the 15th century by Sir George Crichton , Earl of Caithness , a member of one of the most powerful families in Scotland .

This royal palace is where Jamie Fraser was imprisoned and it featured some of the most harrowing scenes of the TV show Outlander . The Palace is also famous as the birthplace of Mary Queen of Scots in 1512 .

Depicted as Wentworth Prison, the prison corridors and entrance were used in episode 15 of the first series when Jamie Fraser was brutally incarcerated by his adversary, Black Jack Randall.

Built in the 1400s and 1500s, the now-ruined palace is set among the spectacular surrounds of Linlithgow Loch and Peel. Visitors can climb to the top of the palace for a magnificent panoramic view of the Loch and Palace . Jamie Fraser t-shirts and gifts 4  . Doune Castle Doune Castle is Winterfell in Game of Thrones and featured in Monty Python’s Holy Grail. Visit Doune Castle on a unique private tour of the Game of Thrones Castle in Scotland – Winterfell .  Check availability by phoning us now on 07305-294773 or contact us online . Toll free number 1-866-233-2644

Doune is one of the best preserved medieval castles in Scotland. The Game of Thrones castle private tour starts at 10 am and it includes a transfer from Edinburgh to Doune , a driver/guide , a stay of about an hour at the castle plus a return to Edinburgh . Your guide will give details of the history of the castle , information about the Game of Thrones filming plus all the other films made at Doune Castle including Monty Python and the Holy Grail . Behind the scenes access Visitors to the castle can get details about Game of Thrones filming in the Great Hall and courtyard of the castle . Insider access Take the audio tour of the castle narrated by Monty Python’s Terry Jones and Outlander’s Jamie Fraser ( Sam Heughan ) . Game of Thrones t-shirts The castle was used as the set for Winterfell in the TV series Game of Thrones (2011–present), an adaptation of the A Song of Ice and Fire series of novels by George R. R. Martin. The castle was also used as  “Castle Leoch” in the TV adaption of the Outlander series of novels. The Great Hall is 20 metres by 8 metres , and 12 metres high to its timber roof, again a 19th-century replacement.The hall has no fireplace, and was presumably heated by a central fire, and ventilated by means of a louvre like the one in the modern roof. No details of the original roof construction are known, however, and the restoration is conjectural.Large windows light the hall, and stairs lead down to the three cellars on ground level.

Doune Castle has featured in several literary works, including the 17th-century ballad, “The Bonny Earl of Murray”, which relates the murder of James Stewart, 2nd Earl of Moray, by the Earl of Huntly, in 1592. In Sir Walter Scott’s first novel, Waverley (1814), the protagonist Edward Waverley is brought to Doune Castle by the Jacobites. Scott’s romantic novel describes the “gloomy yet picturesque structure”, with its “half-ruined turrets”. The castle was used as a location in MGM’s 1952 historical film Ivanhoe which featured Robert Taylor and Elizabeth Taylor. The BBC adaptation of “Ivanhoe” in 1996 also featured Doune as a location. Game of Thrones / Outlander Castle tour costs £190 Check availability by phoning us now on 07305-294773 or contact us online Toll free number 1-866-233-2644

How often is the Game of Thrones tour run ?

the Game of Thrones tour is run daily at 10 am . You can combine it with the Outlander tour which goes to four different locations , or just visit Doune Castle – Winterfell 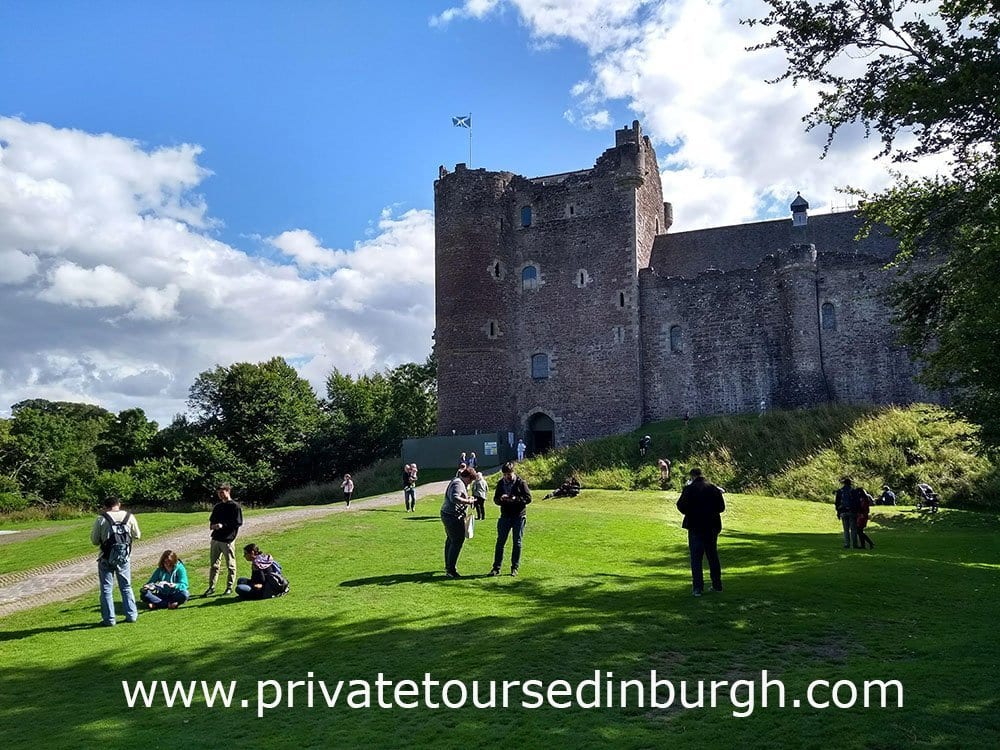