Despite his death, Frank remains an important character in Outlander Season 4. After all, he played a huge role in Brianna’s upbringing, and there are going to be comparisons she’ll make between him and her biological father. It’s just human to make comparisons.

Jack Randall was in command of the garrison at Fort William ( Blackness Castle ) for four years. 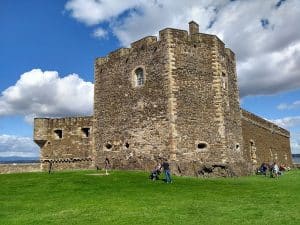 In 1740, Jamie Fraser is arrested at Lallybroch while trying to defend Jenny, taken to Fort William and brutally flogged by Jack Randall.

It’s all about the flashbacks

Outlander Season 4 could always use flashbacks for Brianna. She’ll still have stories to tell Roger and she’ll continue to watch out for her mother by reading the historical documents to track them. After all, she’ll want to know where her mother is and when she dies.

As she’s going through the documents, Brianna could find something her dad knew or mentioned. She could find paperwork that belonged to him. This would allow her to delve more into stories about him, using flashbacks to tell the stories for the audience.

While we’ve seen some of the scenes from Claire and Frank’s points of view, is it possible that Brianna actually heard some of the arguments? Could she have watched them and those are moments that stand out for her? The flashbacks could be of her side of those arguments.

Filling in the gaps

There are still elements to the story that Outlander hasn’t told yet. Frank wouldn’t have been able to just forget about Jamie. Brianna’s red hair would have prevented that. He had to know done his research, known where he was and what had happened to him. He may have even learned that Claire would eventually go back to the past.

In fact, is it possible that when Frank wanted to take Brianna to England it was to allow Claire to journey back to the past? Did he want to give her the chance to make the decision she wished she could have made years ago?

Outlander Season 4 could fill in some of the gaps, using flashes of Frank to make it easier on the audience.

Private tours Edinburgh are currently accepting private tour bookings for this year and 2022   . If you are planning ahead for 2022 please contact us as we can now accept provisional bookings for next year. Private tours of the Highlands , Outlander , Game of Thrones , Doune Castle and Eilean Donan Castle .

Private Tours Edinburgh  have the ‘We’re Good To Go’ industry standard and supporting mark and we adhere to all the public health guidance, and have carried out a COVID-19 risk assessment to ensure the required processes and protocols are in place. Phone +44131-549-9785 for more details or contact us online .

Explore Scotland with our own unique videos of Scotland including Outlander film locations , the Highlands , the Kelpies and Eilean Donan Castle .

Private tours Edinburgh are currently accepting private and custom tour bookings for the autumn . Phone or Whatsapp us on +447305-294773 .  Availability is currently good for most tours . If you are planning ahead for 2022 please contact us as we can now accept provisional bookings for next year .
Outlander tours can be booked online or by phone on (+44) 0131-549-9785 for details and bookings . Edinburgh Scotland tours include tours of the Highlands .

Good to Go – The ‘We’re Good To Go’ industry standard and supporting mark means we adhere to the respective government and public health guidance, and have carried out a COVID-19 risk assessment to ensure the required processes and protocols are in place. Phone +44131-549-9785 for more details or contact us online .

Explore Scotland with our own unique videos of Scotland including Outlander film locations , the Highlands , the Kelpies and Eilean Donan Castle .