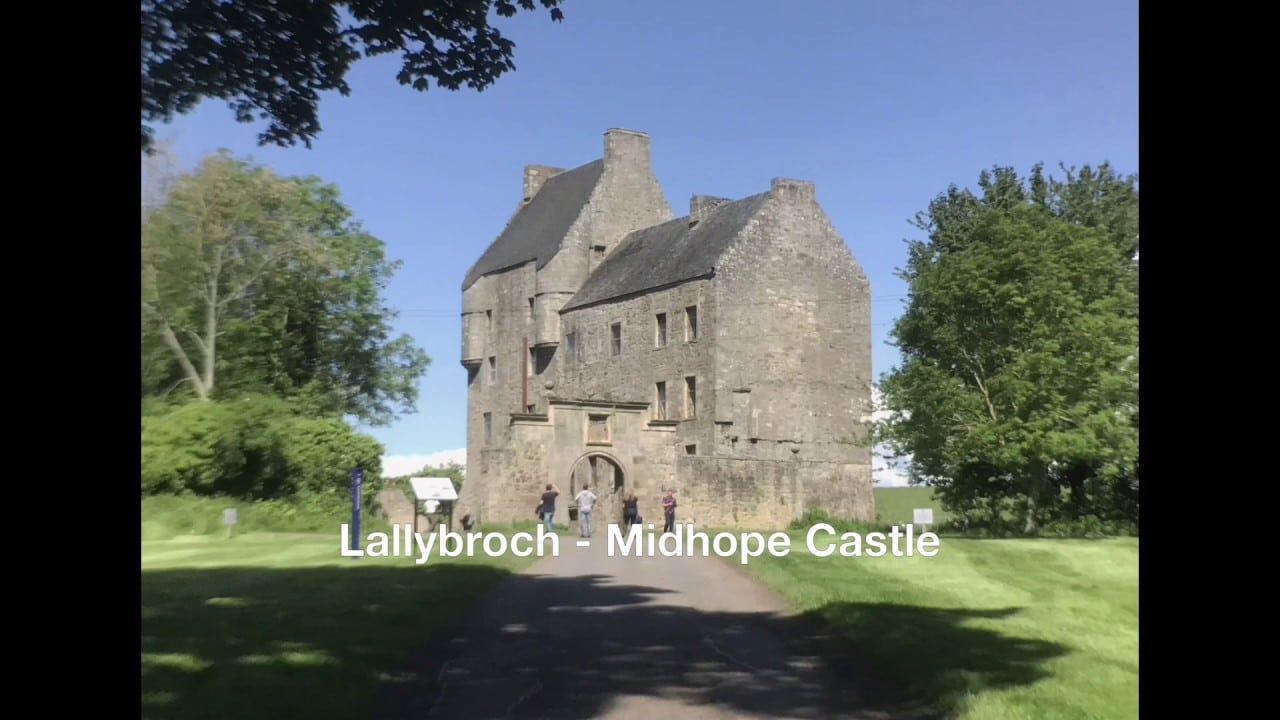 Tours start at 10 am . We also offer bespoke private tours with the option of choosing your own itinerary . Phone / WhatsApp +44 7305 -294773 for booking or contact us online . Tours start from locations in Edinburgh or Glasgow . Free pickup from  Edinburgh/ Glasgow city centre , your hotel or port . Other pickup points can be arranged . Small groups of up to four people three Outlander filming locations . Itinerary On this tour we visit three castle locations used for filming the hit series Outlander. Based on the best selling novels by Diana Gabaldon, Outlander is filmed in a number of locations in castles and towns in  central Scotland.

Scenes were shot at Midhope Castle near the Hopetoun Estate near South Queensferry. Midhope was built in the 15th Century and was built by John Martyne, laird of Medhope. It was rebuilt in the mid 1600s and remains much the same today. Visitors are asked to admire Midhope from a distance as the interior remains largely derelict . Midhope Castle is the external location for fictional Lallybroch, the family home of character Jamie Fraser , and it is located on the Hopetoun Estate .  Midhope Castle dates back to the 15th Century and although the exterior is relatively intact the castle is derelict inside. Midhope Castle tours can be booked on Toll free number 1-866-233-2644 Freephone 0800-6190575 on  or online .

2 . Blackness Castle goes back to 1440 . The castle provides the setting for Fort William, as the original fort no longer exists. The castle is long and narrow because of the shape of the rock on which it is situated and it is sometimes called ‘ the ship that never sailed ‘ . It guards the bay at Blackness and is only a few miles from Linlithgow Palace . The first castle was built in the middle of the 15th century by Sir George Crichton , Earl of Caithness , a member of one of the most powerful families in Scotland . King James II acquired Blackness in 1453 when he annexed the lands of the Crichtons . From then on the castle was mainly used as a prison . In 1543 Cardinal Beaton was held here for a month . Rebuilding started in the 1530s under the direction of Sir James Hamilton of Finnart who also worked at Linlithgow Palace and Stirling Castle . He was instructed to make the castle safe from artillery , and he achieved this by making the south and east walls very thick . A new tower was built at the south end . In the 1560s , in the reign of Mary Queen of Scots , a Spur was built to protect the main gate . In the 1870s the castle was the main ammunition depot for Scotland .The Castle is a popular location for historical re-enactments and has changed little in 600 years . Doune is one of the best preserved medieval castles in Scotland.

3 .  Linlithgow Palace  ( Wentworth prison ) This royal pleasure palace and birthplace of Mary Queen of Scots became the backdrop for some of the most harrowing scenes of the show. Depicted as Wentworth Prison, the prison corridors and entrance were used in episode 15 of the first series when Jamie Fraser was brutally incarcerated by his adversary, Black Jack Randall. Built in the 1400s and 1500s, the now-ruined palace is set among the spectacular surrounds of Linlithgow Loch and Peel. Outlander Castle tours can be booked on 07305-294773 . The tour spends up to an hour at each location .

Originally dating to the 13th Century, Doune Castle near Stirling was Castle Leoch and a favourite place for Mary Queen of Scots .