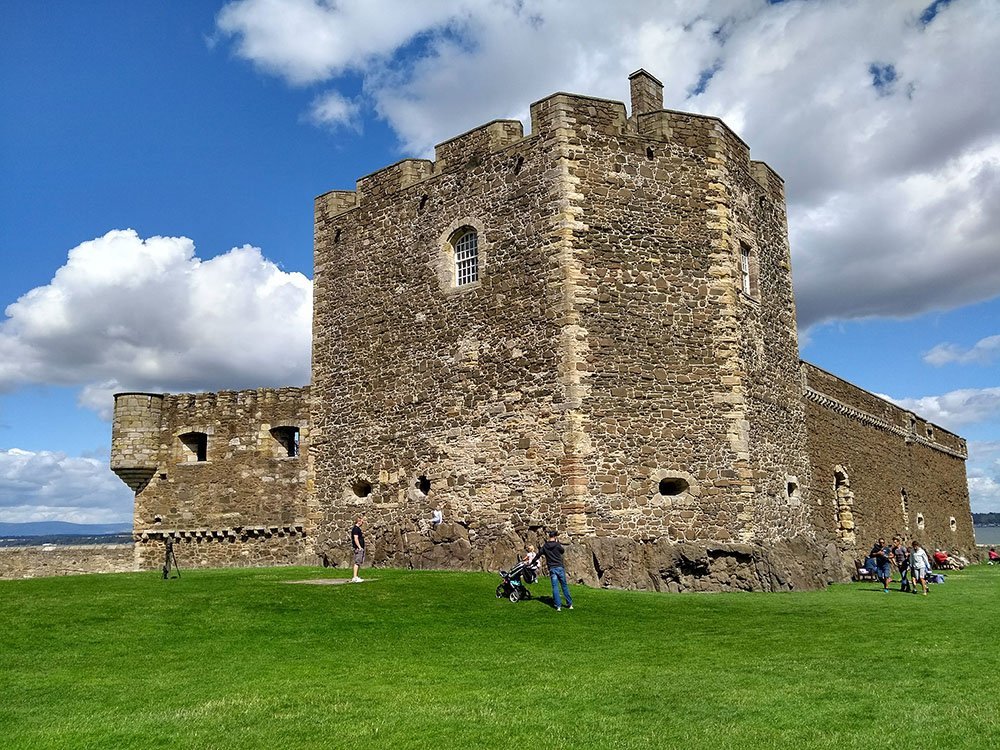 Take a tour of Blackness Castle in our film locations tour . Phone 07305-294773 for more details or contact us online . Starring Chris Pine as Robert the Bruce the lavish Netflix production was filmed at locations across Scotland last year, also including Linlithgow Palace. Blackness Castle. But the Blackness scene won’t be forgotten in a hurry – it features an actress playing historical character Isabella MacDuff being suspended from the battlements in an iron cage.

Filming for The Outlaw King at Blackness took place over two weeks  and (off camera), a mobile crane was used to support the notorious cage – where the actress reportedly endured several takes in freezing cold.

The movie is on general release  and its initial trailer clip  registered 26 million views in the first 24 hours. It can be seen at https://www.youtube.com/watch?v=Q-G1BME8FKw Filmed entirely on location in Scotland, the movie was shot in key locations around the country, including Edinburgh , Linlithgow and Berwick. The Outlaw King is the most expensive film ever made in Scotland .

Many or most of the extras involved are Scottish – the production company was besieged by Scots aiming to play the part of foot soldiers in King Robert’s army when it advertised for extras last year. Iconic actor James Cosmo, (70), who appears in the film reportedly says it could be Scotland’s greatest ever movie, likely to replicate for key Scottish historic sites the phenomenal surge of visitors to Stirling in the wake of the 1995 release of Braveheart (in which he also starred). That will mean new droves of tourists heading for Blackness, already benefiting from its appearance in Outlander, and to many other locations across the central belt associated with the Scottish Wars of Independence.

The Outlaw King tells the story of how Robert the Bruce, who defied England’s King Edward I, became a hunted fugitive but turned the tables to inflict crushing defeat on the English army at Bannockburn and ultimately won Scottish independence. Rounding off a golden year for major Scottish-based history epics a new movie about Mary Queen of Scots also launches in November. Culture secretary Fiona Hyslop said: “Scotland has the talent and the opportunity to grow its TV sector and the job of Screen Scotland is to make sure we seize the moment.”

Jenni Steele, film and creative industries manager at national tourism agency VisitScotland, said: “Film tourism is booming in Scotland, with Outlaw King and Mary Queen of Scots some of the exciting new films set to feature the country on screen. “Film and TV productions not only showcase the unique mix of stunning landscapes, rich heritage and fascinating stories Scotland offers, but can inspire set-jetting fans to visit, with research showing that one in five visitors come here after seeing Scotland on the big and small screen.”